2016 AFDR: How Are You Doing?
Company Added
Company Removed
Apply to Request List
0 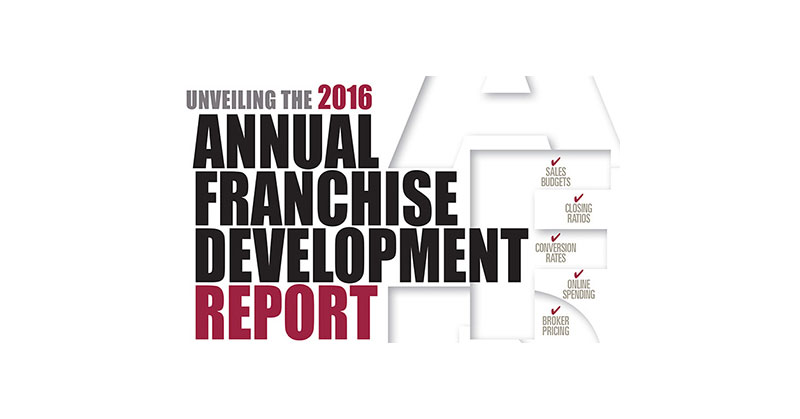 Benchmarking the good, the bad, and the best practices

Results from the 2016 Annual Franchise Development Report (AFDR) were unveiled in October at the 17th annual Franchise Leadership & Development Conference. The 2016 AFDR is based on responses from 134 franchisors representing 51,004 units (48,431 franchised and 2,573 company-owned).

Participants in the survey consisted of franchisors who pre-registered for the conference and completed an online questionnaire. Responses were aggregated and analyzed to produce a detailed look into the recruitment and development practices, budgets, and strategies of a wide cross-section of franchisors. The data, with accompanying commentary, provide the basis of the 2016 AFDR.

Highlights from the report were presented in a 90-minute general session. Gary Gardner, chair of Franchise Update Media, moderated a panel of four high-powered franchise development executives, who interpreted and discussed the data and research findings before responding to questions from attendees.

The mystery shoppers this year were Franchise Business Review, FranConnect, and Landmark Interactive. See page 44 for their thoughts and comments on this year's results and more on the mystery shopping research.

Below are additional highlights from the 2016 AFDR. Ordering information can be found below.

The 2016 Annual Franchise Development Report (AFDR) delivers data collected from 134 franchisors representing 51,004 units, with responses organized by industry, unit investment, system-wide sales, and more. The annual report provides franchisors with the ideal tool for studying their development practices, benchmarking their sales and recruitment budgets against their own industry categories, and setting goals and budgets for the year ahead. The report also includes research into online recruitment practices, the growing use of mobile and social tools by prospects, and best practices by franchisors.

The 2016 AFDR is packed with timely information and benchmarking data that can help your franchise system grow faster and close more deals--while saving thousands of dollars in cost per sale. Based on in-depth surveys from 134 franchise companies, this thoroughly researched report reveals the success drivers that are sure to boost the output and quality of your sales department.

Filled with the most comprehensive sales and lead generation data in franchising, the 2016 AFDR, at more than 250 pages, is a must-buy tool for franchisors, development consultants, and advertising, marketing, and technology suppliers--and is ideal for benchmarking and building budgets and media plans.

The complete 2016 AFDR, with analysis and benchmarks, is available for $199. New this year is a 1-hour video of the discussion and analysis of the results by four development pros, held at this year's Franchise Leadership & Development Conference in October. For ordering information, call Sharon Wilkinson at 800-289-4232 x202, email sales@franchiseupdatemedia.com, or visit franchiseupdate.vizigy.com.

AFDR: How They Use It

Following the conference, we asked three of the panelists on the AFDR panel how they use the AFDR (the fourth, Steve Dunn, was out of the country). Here's what they had to say.

"I use the report to analyze my individual metrics: my request-to-application ratio, applications-to-'join the flock' day (discovery day) ratio, and lead conversion from unique visitors to our website to those who fill out a request for more information," says Paul Pickett, vice president of franchise development at Wild Birds Unlimited, which took first place in Best Overall Performance in this year's STAR Awards. "I also look at how we're spending money as a percentage of our advertising budget compared to others."

Pickett also uses the report's extensive benchmarking data to determine if there are any opportunities he might be missing out on to improve his franchise development results. For example, he had moved away from using print for several years, but when he studied the data on how other brands were using print ads, he decided to give it another try and took out two print ads in Entrepreneur magazine for December and January. "If you're willing to have your mind opened, this report is a way to do it," he says.

"I look at areas we can improve, where we're doing well, and how we can do better," he says. "Just because you're #1 doesn't mean you're going to stay there."

"This is the only place we can get a benchmark--the numbers to give us an idea of how we're doing. It shows us where we are, where the industry is, and where it's going," says Pete Lindsey, vice president of franchising at Sport Clips, which took second-place STAR Award honors this year for Best Overall Performance.

The industry averages in the AFDR also give his team a number they can use in determining their own goals. In terms of cost per sale and cost per lead, he says, "Everybody's trying to look at the benchmarking and beat it."

He also uses the report to continually improve his sales process, based on the annual mystery shopping for telephone and website response, using the judging criteria as a guide to ensure that best practices are followed throughout his company's sales process.

"The report is so helpful to us in making budget comparisons. We were in a vacuum building out a budget. We expected results, but didn't get them," says Josh Wall, vice president of franchising and strategic development at Christian Brothers Automotive, which won a STAR Award last year for Best Website Prospect Follow-Up. "The first time I got hold of the AFDR, I knew we were grossly behind in our lead generation budget. I saw we weren't getting the lead generation we wanted because we were under budget. This was as recent as 3 or 4 years ago." He says the benchmarking data is especially good for smaller franchisees who don't have the internal resources larger brands do,

The AFDR benchmarks also provided him with comparative data to show his CFO and CEO what other companies were spending in their recruitment budgets. "It allowed us to bolster our budget. We're closer to the median now," he says. "The report helps me evaluate how we're doing on budget and metrics compared with our peers."

One number that's extremely important to Josh Wall at Christian Brothers Automotive is unique website visitors to lead conversion. "I watch that one like a hawk. We spend a large portion of our budget on our website," he says.

This wasn't always the case. Two years ago the company launched a new recruitment website--and unique visitor traffic rose 394 percent year-over-year, he says. "Spending a little bit of money on SEO had a tremendous impact on leads," he says.

His first goal was to drive up the number of people coming to the recruitment website. "If I get enough people in front of that site, and if it's sticky and interesting enough, it will convert a reasonably high number of those unique visitors," he says.

The next goal was finding a way to make visitors stick around. Having learned about the relationship between the amount of time visitors spent on a website and further activity, especially conversion, he began working to boost the amount of information available online.

"I realized we didn't have enough content, so we beefed it up , including video," he says. Visitors were spending very little time on the company's website. "Our average time was less than a minute. That's when we decided to throw more out there. We needed more content to interest the right people," he says.

Before the change, he says, "Our website had very little content and our process was 'gated.' So if someone wanted more, they'd have to come to us." He calls this an old theory, the idea being to get prospects on the phone with a sales rep. The new approach, which is working much better, is to "un-gate" the information--"to put it out there and let the right people gravitate toward the opportunity," says Wall.

This approach is paying dividends. "Candidates in our qualifying process are much more educated. It feels more natural," he says. "They've educated themselves, which allows me, as a recruiter, to drill down and ask them questions to see how well they qualify for one of our franchises."

And conversion is up--significantly. "Our conversion rate now is a little bit higher than 6.5 percent. I'm pleased because our number is close to twice the benchmark in the AFDR," he says. "By having a recruitment website and continuing to spend SEO dollars, and a little bit of an SEM campaign, we expect it to continue to grow," he says.

Managing more leads demanded further change. The company had no lead qualifier and a very poor contact rate, says Wall. "We were not stewarding our lead flow very well. That's one of the changes we made. It allowed us to really jump up our contact rate," he says. "Without this report, we might have continued floundering." Walking the talk, the company won a STAR Award in 2014 for Best Website Prospect Follow-Up.

Pete Lindsey has a big word on his office wall: Convert. "You have to measure conversions, but a lot of people get too complicated," he says. For him there are three conversions to watch: 1) lead to inquiry, 2) lead to discovery day, and 3) discovery day to contract.

His approach is to give his sales team numbers to meet, then help them hit those numbers. "When your team realizes they can move conversion metrics, you have a really powerful team," he says. "We goal set every year and move them up. It doesn't work if people don't know exactly what they're responsible for." And, he's found, when someone on his team is struggling to meet their numbers, team members will rally around that person and ask what they can do to help.

What Is Franchise Development?

"What I have learned over the years is that it's not rocket science--it's just attention to detail, and a mentality of honoring the fact that people are interested in investing in your brand," says Paul Pickett. "And when you're able to create a culture like that, it is very rewarding and easy to attend to your candidates in the way they want to be attended to."

Pickett takes his role seriously. "When I see people not attending to candidates, or not answering their questions, I think, 'Are you looking at candidates as an honor to serve them?'" he says. "You're there to help grow your brand. If you don't believe in that, you might consider another career path," he says.

"It's a commitment to doing the right thing for your potential candidates and for your brand."

Tiger Pistol, the world’s leading collaborative advertising platform, connects the power of brands with the knowledge and credibility of their...
Learn More
Share This Page