The Strengths and Limitations of Franchise Portal Leads, Pre- & Post-Covid 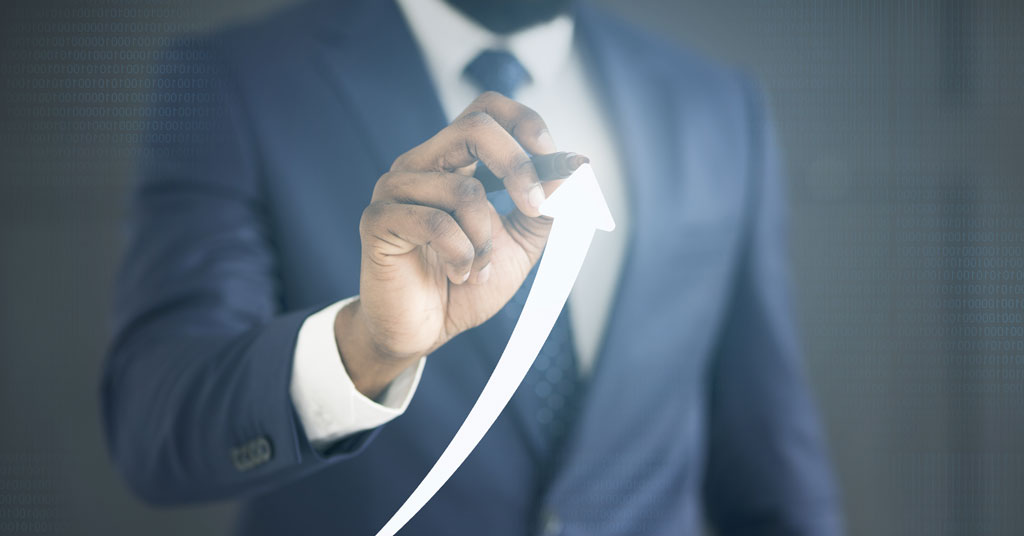 This is the third in a series from FranConnect drilling down into their 2020 Franchise Sales Index report. The first article is available here, and the second article here.

In analyzing franchise sales data from more than 600 brands during the first half of 2020, our assessment of lead sources uncovered trends that can help franchisors make better sales and marketing decisions.

Franchise portals, also known as web portals, are for-profit services that collect and sell leads, typically on a non-exclusive basis. Portal leads are known for producing high quantities of leads at an economical rate compared with other lead generation sources. However, you’ll find franchisors that question the quality of those leads, often raising concerns about recycling, suggesting that multiple franchisors or brokers will call upon these same leads. While I’m not here to debate the merits — rather, I’m in the business of mining the best practices of all lead sources and letting the numbers do the talking — it’s worth noting.

The fact remains that data from the first half of 2020 covering pre- and post-Covid-19 has demonstrated that franchise portals are the #1 source of franchise prospects, as has been the case for each of the last 6 years I’ve been reporting on franchise sales. During the first half of 2020, portal leads represented 38% of all lead sources, resulting in the creation of 55,000 leads in Q1, compared with 49,000 new leads in Q2, a decline of 12%. Despite a reasonable decline, these numbers significantly outpace all other lead generation sources, likely the result of 57 million U.S. jobs being vulnerable.

Not surprisingly, it appears that the pandemic’s impact on the economy is creating the need for people to reassess their career options. Portals will be the primary beneficiary of increasing lead flow in the months ahead.

While portal leads are very effective at populating the top of the sales funnel, those leads convert at a much lower rate than most other lead sources. This has been the case with lead-to-deal conversion rates pre-dating the pandemic. At a rate of 0.3%, you’ll need an average of 350 leads to generate a single sale.

Despite a lower closing effectiveness rate, the sheer number of leads ended up generating 11% of all franchise sales culminated in Q2 2020, slightly ahead of Q1. In total, we saw 294 franchise sales during the first half of the year attributed to portals.

Let’s look at what else has transpired with portals during Q2 compared with Q1.

In analyzing portal deals, we found that they increased significantly for enterprise brands (31%) over Q1; held steady for mid-market brands; and declined 59% in the smaller market segments during Q2.

In total, the larger enterprise brands captured an astounding 84% of all portal deals in Q2.

It’s very likely that these declines reflect reductions in programmatic marketing spends and concerns about the long-term viability of smaller and less-established brands. 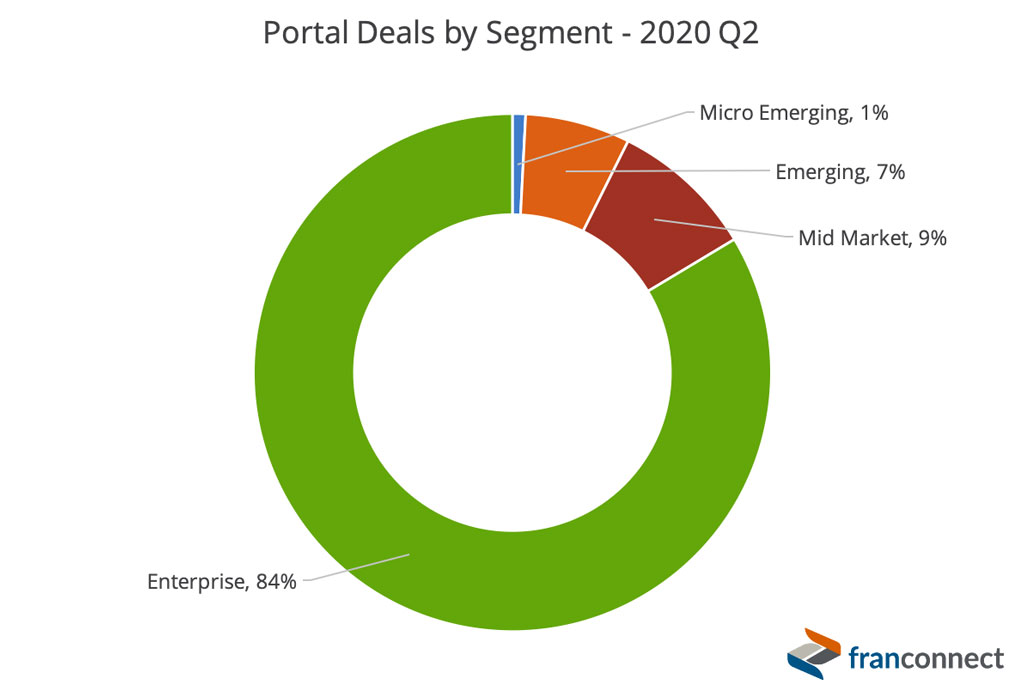 Bear in mind that our data shows an increase from inquiry to close of 224 days on average — though enterprise brands reduced their time to close by 26% quarter-over-quarter. Otherwise, the deals shown here aren’t truly reflecting the impact of the pandemic. There is, however, the likelihood that a more significant number of candidates are waiting out the pandemic or have otherwise lost the ability to purchase at this time.

Industries and markets that are benefiting

When filtering by franchise industry, the Commercial & Residential segment received the greatest number of leads (though down by 10% in Q2), and 34% of all portal deals across nine industry segments.

Despite the adverse impact the pandemic wreaked on QSR and fast casual restaurants, no other industry was able to accomplish more with less. Though deals declined by 30% in Q2, conversion rates were 0.9% — three times better than the overall average of all other industries.

Business services generated a conversion rate of 0.6% relative to the average and the Commercial & Residential industry ranked third at 0.3%.

Though few industries were affected as adversely as those in the personal services vertical (hair salons, fitness centers, massage therapists, etc.), they actually generated 9% more sales in Q2 than in Q1. 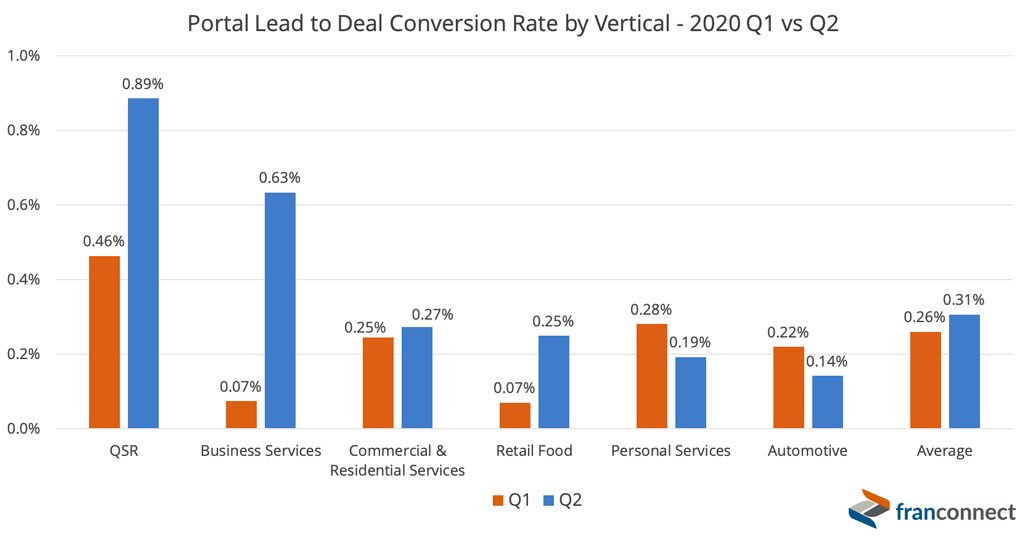 Dozens of companies compete in the franchise portal lead generation space, so my intent is always to narrow the field by focusing not on leads, but on the by analyzing which companies produced the greatest number of sales and those with the best closing effectiveness rates. Top performers in Q2 were:

Portals deserve their place in an effective franchise sales playbook

It’s my belief that there are other positive factors to consider when contemplating working with franchise sales portals. They are cost-effective, do a good job of generating brand awareness, and are a means for individuals to do research on your brand without necessarily having hit the “Send Free Info” button. This can explain why “franchise websites” is listed as a major lead source, as prospects tend to complete their independent research and then seek out the franchise recruitment website. This is something that I’ve often said results in a false positive where websites receive the lead attribution — but I’ll save further commentary on this phenomenon for a future article.

Additionally, it’s quite possible that enterprise brands are doing so much better because they typically employ lead qualifiers who are vetting candidates earlier in the sales process and weeding them out, enabling franchise sales directors to spend their time on closing deals rather than dealing with tire kickers.

So maybe it’s time to put those biases aside. The percentage of deals attributed to portals increased from 6.5% of all deals in Q1 to 10.7% in Q2. They may take more effort to close, but they represent the fourth most-effective channel for closed deals.

Keith Gerson is President of Franchise Operations at FranConnect, a recognized leader in franchise management software. For the past decade, he has worked closely with executive boards and leadership teams that are part of the company’s portfolio of more than 800 brands and 150,000 locations, with a focus on helping franchisors achieve their desired goals in sales, operations, and marketing. For more information, best practices, and guides, visit the company’s Resources Page.

Blueprint for Growth, Part 2: Expand your range of products or services
Service Brands Continue To Grow as 2021 Winds Down
Sponsored
The Vitamin Shoppe® Sets Franchisees Up for Success!
Turn Up the Heat! El Pollo Loco accelerates its transformation
Building Sustainable Long-Term Investment Habits For 2021
Don't Do This! 8 common mistakes business sellers make

ApplePie Capital provides a fresh new approach to franchise financing that is focused on your growth and success.
Learn More