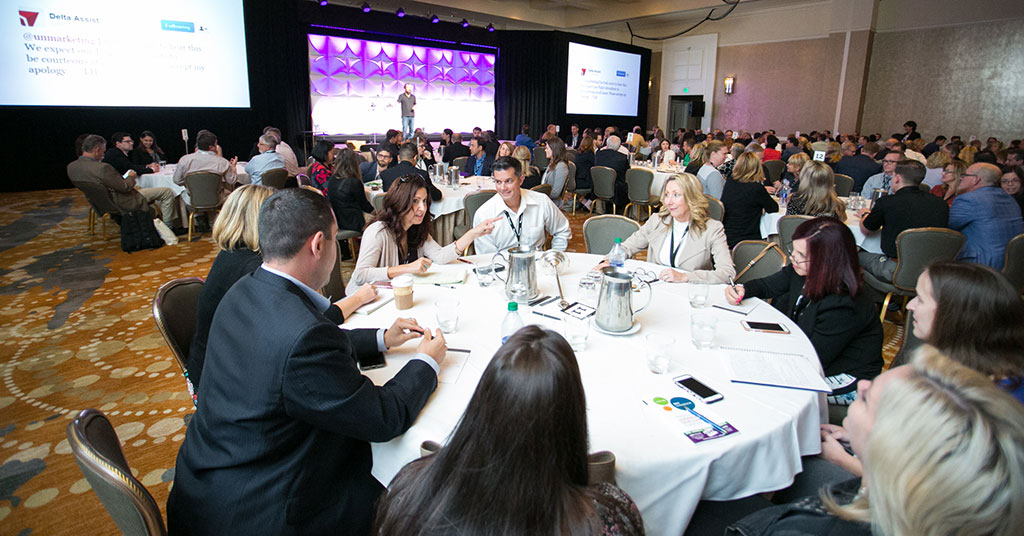 For the first time in the 19-year history of the Franchise Leadership & Development Conference (FLDC), more than 500 top-level franchising executives gathered for franchising's premier sales and development event. The FLDC has become the priority "go-to" conference for sales and C-level franchise professionals looking to sharpen their sales chops, improve their development teams, learn best practices from the pros, and network with the best in the business. 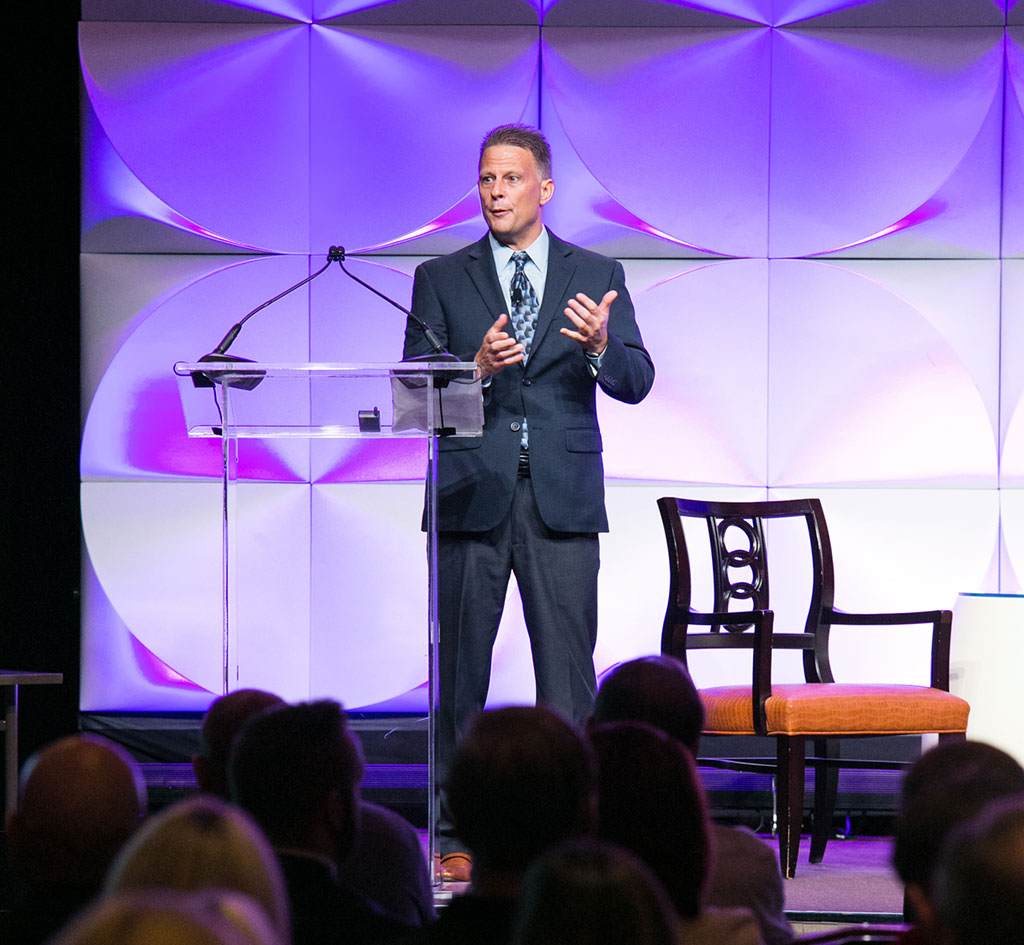 Strictly by the numbers, this year's event at the InterContinental Buckhead in Atlanta attracted 508 total attendees: 321 franchise executives representing 187 brands in the food, retail, and service sectors. Seventy-three companies stepped up to sponsor this year's conference.

Once again two full days were carefully planned to provide opportunities for franchise veterans, panelists, and guest keynote speakers to address and interact with attendees in sessions, roundtables, and large general sessions. The Conference Advisory Board helped plan timely and topical sessions that packed meeting rooms.

The Exhibit Hall was sold out once again and remains a popular networking venue each year. Third-party suppliers and franchise executives mingled freely to discuss business strategies, solutions, and products and services to help brands grow. 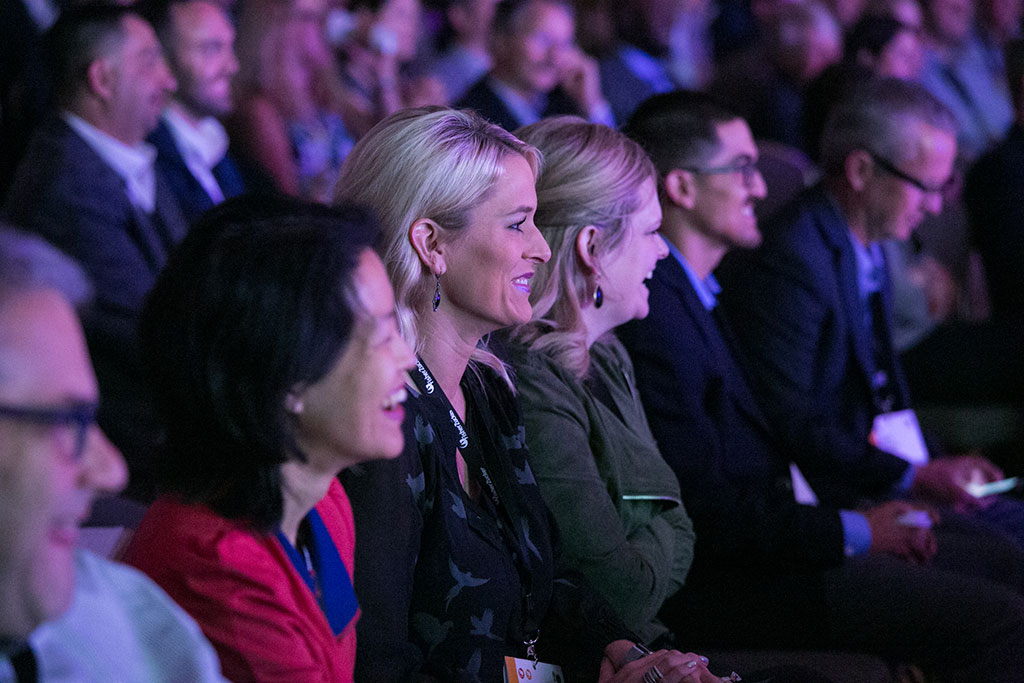 The conference kicked off Wednesday morning with the annual CEO Summit, an opportunity for franchise CEOs and presidents to meet with their peers in an exclusive, all-day session to discuss common concerns and work together in roundtable brainstorming sessions to find solutions. Topics included Redefining Operational Support for Franchisees; 20 Practical, Proven Ideas in 30 Minutes on Operational Support Best Practices for Franchisees; Helping Franchisees Manage the Challenges of Today's Workforce; and Franchise CEOs and the Development Process. Discussions included dealing with different types and sizes of franchisees, unit economics and profitability, the value of annual conventions, and communicating both consistency and change to franchisees across the system. Therese Thilgen, Franchise Update Media's CEO, facilitated this year's Summit.

Meanwhile, two all-day sessions were running in parallel for sales and development executives. The two tracks--Smart & Sustainable Growth and Maximize Sales Performance--were each divided into a morning and afternoon session. The former consisted of Right-Sized Growth for Optimum Brand Development and Franchise Sales Process Deconstructed; the latter was divided into Mastering Sales Fundamentals and Lead and Nurture a Sales Team for Optimum Results.

Each shared how their brands handle prospect phone calls throughout the lead generation process, spending time discussing when to call, what to talk about and when, and how to create a relationship with prospects that not only informs, but simultaneously assesses their fit for the brand. As Hawkins said, "We're not selling a franchise but helping people find the right opportunity... even if it's not us."

In the Lead and Nurture a Sales Team afternoon session, John Teza, a director at NRD Capital Management, and Jennifer Durham, chief development officer at Checkers and Rally's, facilitated an engaging session that had panelists and attendees alike discussing their own strategies and tactics in this area. The panel consisted of Richard Leveille, vice president of franchise development at Floor Coverings International; Pete Lindsey, vice president of franchising at Sport Clips; Charles Watson, chief development officer at Tropical Smoothie Cafe; and Shawn Caric, senior manager of franchising at Dunkin' Brands.

This session delved into the roles and responsibilities of the development cycle, from franchise sales to real estate to design and construction. As a brand grows, panelists noted, those steps and departments become more complex and brands must focus on finding the best talent they can to fill these roles.

"The right team members and an environment of accountability are important to getting results," said Teza.

Success developing the best sales team for your brand boils down to defining goals, finding the right team members to fit your culture, and fostering an engaged team at every level of the brand.

Following the day of educational sessions, attendees, panelists, and CEOs streamed into the Exhibit Hall for the conference's Welcome Reception. Food, drink, and elbow-rubbing with exhibitors, suppliers, and fellow franchisors made for a great way to conclude the day. 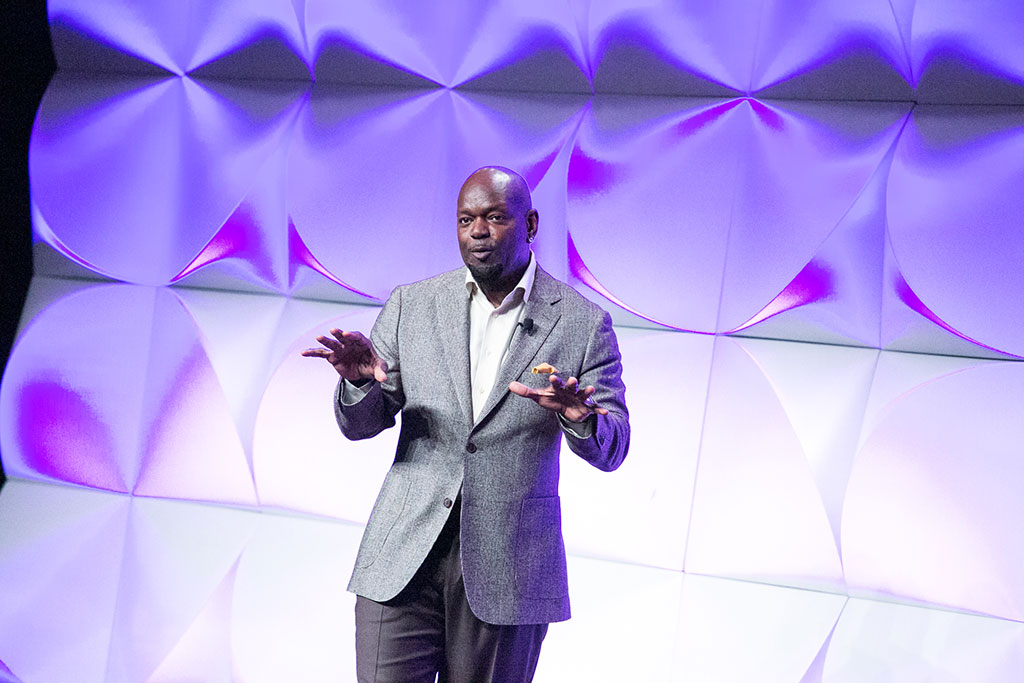 Breakfast awaited early risers for day two before gathering for the conference's Opening General Session. Jeff Sturgis, chief development officer at Fazoli's, served as this year's conference chair. He welcomed attendees and introduced the conference's first keynote speaker, three-time Super Bowl champion and NFL Hall of Famer Emmitt Smith, who proved as captivating a speaker as he was a player during his glory days on the football field.

Last August, Smith became a co-owner of The Gents Place franchise brand. In his motivational keynote, he consistently drew parallels between playing for a football team and being part of a franchise team. In doing so, he recalled his humble beginnings and his drive to succeed. As a nine-year-old growing up in Florida, he saw the Dallas Cowboys on TV and told his dad he was going to play for the Cowboys one day. In high school, already a budding football star, he got to attend a Super Bowl at the Rose Bowl in 1987--and told the friend he brought with him that one day he, Emmit Smith, was going to play in a Super Bowl there. And he did both: Smith went on to play for the Cowboys in a Super Bowl, at the Rose Bowl. (And yes, the Cowboys won.)

"If any of you have a dream about what you want to accomplish in this business, write it down, put it on your vision board, and look at it every day," he told the crowd. "We all have to overcome the spirit of intimidation and fear," he added, whether it's being tackled by a 350-pound lineman, opening a new store if your first one went badly, or being ready to take advantage of the moment if a 5-store territory opens up.

"No one becomes successful by themself," he said, in football, in franchising, or in life. To achieve success, he said, "It takes a whole team working consistently for a period of time--and humility. Success makes us all complacent."

And once you've achieved some level of success, turn around and pass it on, he said. "Don't ever lose the feeling of wanting to help someone along the way, because someone helped you. Always extend a helping hand to someone in need. It's part of who I am, part of the human spirit, gratitude and grace."

Finally, he advised, don't take yourself too seriously. "Success is to be enjoyed, not necessarily celebrated, but enjoyed." With that, he left the stage to a standing ovation.

FRANdata President Edith Wiseman stepped up next to deliver the annual "State of the Economy" report. Domestically, 2018 will look very similar to 2017, she began, as the second longest expansion since the Second World War continues to inch along. Domestically, potential headwinds include uncertainty as the new administration and Congress continue to struggle. Globally, they include the growth of political movements in Latin America; the impact of Brexit on Europe; a slowing economy in China; and the rise of nationalist sentiments in South Asia. On the whole, she said, the economy remains stable, affected by a declining unemployment rate and a slight uptick in consumer spending.

Mapping her economic forecast onto what she called the "8 Pillars of Franchising" (training, brand marketing, corporate financial efficiency, real estate construction and design, business opportunity/unit economics, development, compliance, and support), Wiseman discussed such topics as how the commoditization of services is changing markets (think Uber and Airbnb); GDP growth (stable at 2 percent with a possible rise in Q3); unemployment (down toward 4 percent); and interest rates (flat, with moderate hikes likely in 2018).

Franchise Update's EVP and Chief Content Officer Diane Phibbs presented an overview of the findings from the 2018 Annual Franchise Development Report and Mystery Shopping survey. (See full coverage of both starting on pages 32 and 42.)

The central message? Some brands are handling leads extremely well, while many others continue to drop the ball on fundamentals such as returning prospect calls quickly (or at all) and pre-qualifying. All the panelists agreed there's room for improvement and recommended that franchisors routinely mystery shop their own sales teams. 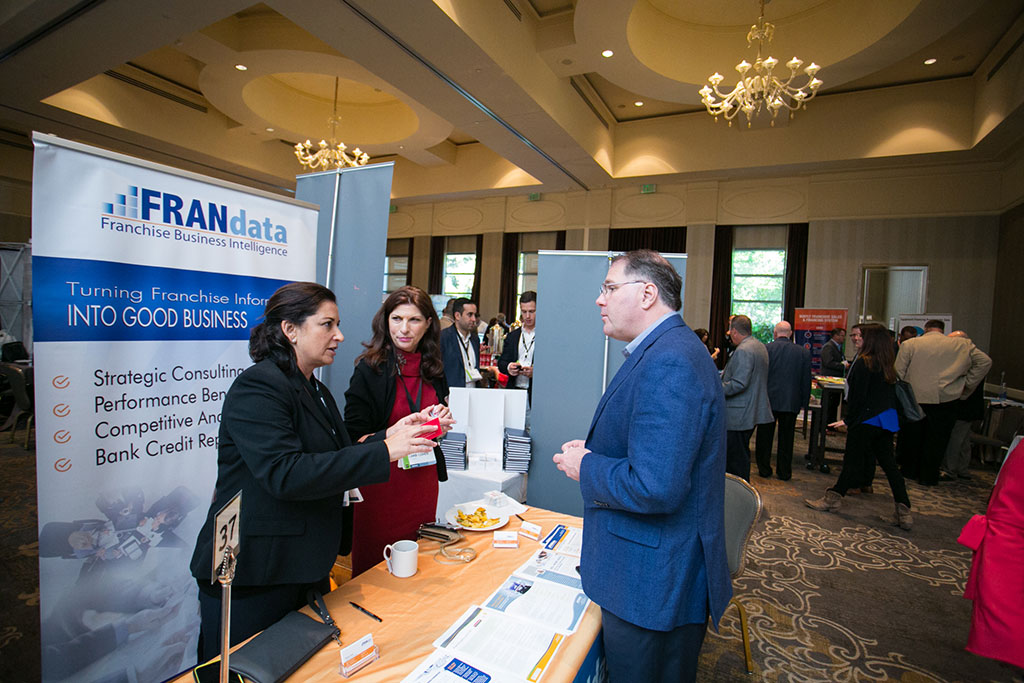 The Exhibit Hall opened back up for lunch and more opportunities to meet, greet, and do business. Then it was time for afternoon breakout sessions.

Ford described the process at Huddle House. "Our definition of targeted recruitment is finding the right buyers in the area in which you want to grow," she said. "Truly understanding our buyers allowed us to target our efforts and kick recruitment into high gear."

When it comes to leads, Pucel said, sweetFrog focuses on "casting a smaller net because it means less time chasing the wrong fish." She also said the brand is very engaged in using new marketing techniques to get the results they want. The results of sweetFrog's more targeted lead search? Lower volume and higher conversion rates.

The final breakout sessions of the day included Sales Measurements for Success, Market Planning for Optimum Market Penetration, and Crafting the Right Message for Your Target Audience. 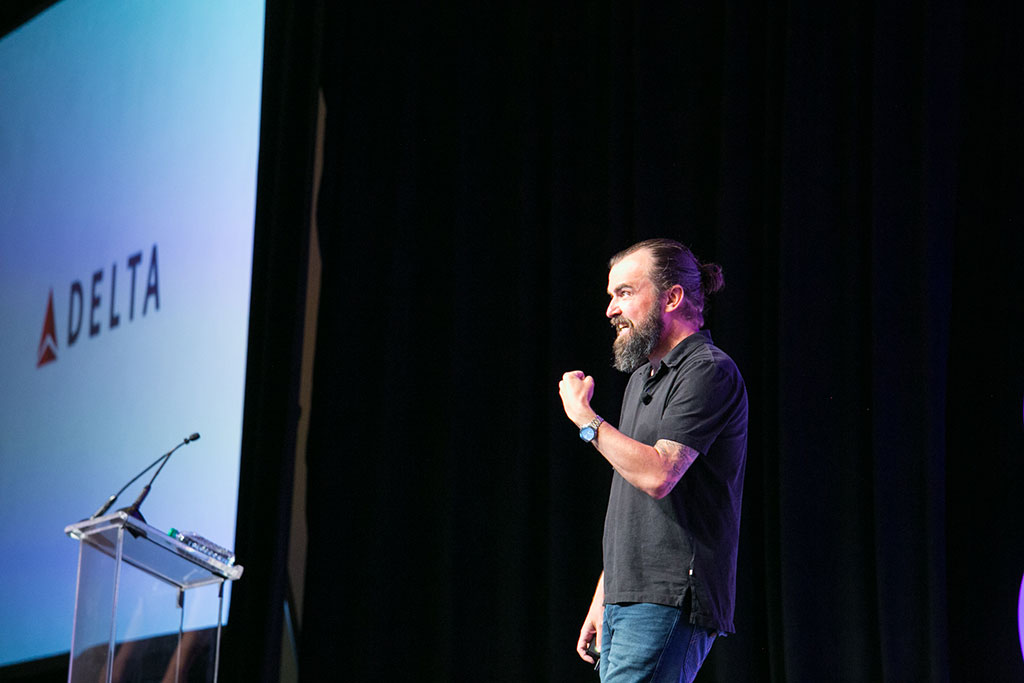 The day's educational offerings concluded with a Business Solutions Roundtable Challenge Session, Overcoming Objectives To Seal the Deal, led by Scott Stratten, author of Unmarketing and Unselling. Stratten used his considerable wit and firsthand experience working with and being a customer of numerous brands to weave a tale of how brand image, responsiveness, and customer service focus are essential to creating companies that rise above the competition.

That evening, attendees gathered at nearby Maggiano's Little Italy for the annual STAR Awards dinner and ceremony. Interviews with this year's winners begin on page 50.

Each presented an overview of how they develop their sales and development budgets, teams, and strategies each year. Bloom led off the presentations with "What is the Vision?" Monaghan followed with "Managing Expectations--Building a Realistic 1-Year Plan." And Brown finished with "The Right Team To Implement the Plan." The session featured small group breakouts after each presentation, with attendees tackling the challenge of crafting plans and devising solutions to enhance their franchise development practices in the coming year.

Coley concluded the session, and the conference, with what he called the "gives a damn factor," reminding the room full of sales pros "how privileged are we to do what we do: talk with people making life-changing decisions, matching it up and finding the right fit."

Wait until next year!

"The FLDC is a great conference that packs a lot of content and networking opportunities into just 48 hours," said Dan Stone, chief business and people development officer at Front Burner Brands. "I always walk away with valuable insights of what we should focus on, as well as validation of tactics and strategies we already use."

For Omar Oselimo, CEO of the Reggae Shack Café, "The Franchise Leadership & Development Conference was great. As someone that is getting started, and who lost $50,000 by choosing the wrong franchise development company, I wish I knew about the conference beforehand. I learned so much and met so many great leaders it was a life-changing experience."

To learn more about this year's FLDC and register for 2018, visit www.franchisedevelopmentconference.com.

BY NUMBER OF UNITS

Franchise Update Media (FUM) is the trusted resource for the franchise industry. For 30+ years, FUM has been the leader in providing valuable...
Learn More